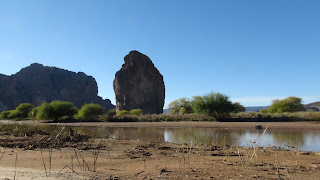 Short update of the trip here in South America. After a little climbing trip in Caracas where I did some sportclimbing in La Guairita I left Venezuela and flew towards Argentina. Three days of sitting on a plane or bus brought me towards Bariloche. One of the city´s in Argentina that have a lot of climbing around. I only stayed one day in Bariloche before I moved to Piedras Paradas with a local Argentine, Maty. 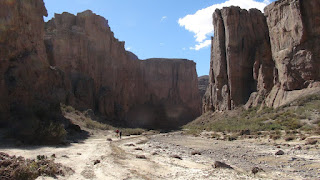 Piedras Paradas is a national park four ours southeast of Bariloche. This is a climbing area that is developed a little bit first in 2000. The reason I went to this place is to develop it more thanks to the next Petzl Roc Trip. After the amazing climbing Petzl developed in China, now Petzl will have a new rock trip in Piedras Paradas, Argentina. This amazing desert park is far away from civilization. It exists out of beautiful volcanic canyons. The Petzl Roc Trip will take place in the biggest canyon with walls of 200 meters each side. It’s not only a tall canyon but also profound, you can walk from begin to the end for about 5 kilometers.

About 30 climbers from Argentina, France, US and more where invited to bold new routes and search for amazing new lines in this beautiful canyon. I suddenly ran in to the right people and am lucky I ended up here. With a lot of bolds, drills and motivation everybody assaulted the canyon and started putting up amazing lines everywhere. For about two weeks now we have been bolting new lines and it resulted in some nice new sectors containing hard short bouldery routes in steep overhangs to long 50 meter endurance routes. 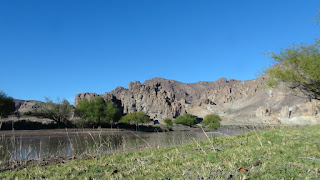 Altough the quantaty of impressive walls, the rock is a lot of time chosy and not good to climb on. So we had to search very well to find good sectors and solid rock. But this is not a big problem because there is just a lot.

The athmosphere at this Petzl Bolting Trip is amazing. Every night everybody comes together and tells abouth there new lines. A lot of music, some good Argentina wine and good food. A luxuary trip compared to Venezuela Jungle climbing. 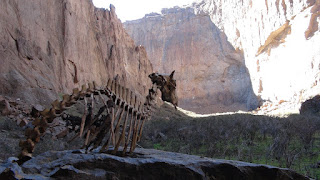 Yesterday we came to town with a group of 15 climbers/routesetters to have a nice restday and enjoy the luxuous aspects of civilization. On our way to town we picked up a bump on the side of the road! This bump came right out of the Venezuelan Jungle and is also Belgian.

I was pretty happy to see Sean and hear his stories. I’m exited for the nect part of the trip when we go to Bariloche and Frey. At the end we will be in Tuzgle in the north of Argentina. But first we go back to the Piedras Paradas to find some more king lines!

The goal of this rock trip is not only to have a great event but is also to leave a new and amazing climbing area for after the trip in november 2012. So Petzl helps not only developing the climbing area but also the camping. Right now the camping doesn’t has anything except water for drinking. The plan is to build showers and toilets. On our rest days Erwan, the organiser of the trip, gets us to work on toilets. Dig holes and make cement is all we did yesterday as you can see on this picture. 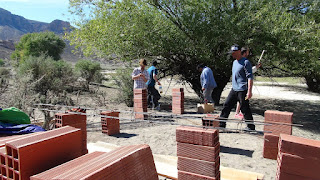 In a week I’ll be back with more pictures to give you an image of how the climbing is!