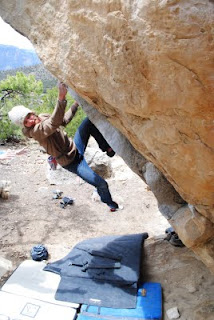 It has been a while ago since I wrote a blog post. I’ve spent the past five days in Joe’s Valley with Tom, Mike and TJ. Mike left after one day to take a little break in his one year climbing trip. He went back home for two weeks, really long I think! So I had to say goodbye to Mike for a long while, because from now on our future destinations are not the same anymore!

I’ve had quite an adventure with the car on my way to Joe’s Valley. When I just past Green River my van acted really strange, it was something with the transmission that was clear. I stopped at a rest area where I saw that there was steam coming from underneath the car. I let the engine cool down a little and filled up the transmission oil, it was completely empty. There was definitely a leak somewhere. I realized that I had to go back to Green River to see a mechanic. After an hour waiting I left on the highway the same way I was going until I saw a place where I could make a U-turn. This U-turn was illegal so I was happy no cop saw me. Towards Green River it was all downhill so I’ve put the car in neutral and just rolled down 15 miles, pretty slow. In Green River I saw a mechanic who told me I probably could drive toward Price the closest ‘bigger’ city where they probably could fix my car. And I did those 60 miles with one quart of transmission oil in the engine. When I arrived in Price it was already 9pm so I slept there at a Wal-Mart parking lot. The next day was a Saturday and almost every mechanic was closed, I was almost crying when I found a little mechanic named John! Mechanic John was my hero for the day! He found out where the leak was and showed me everything. Now I know my car a little better and know what was going on. He even fed me some cinnamon rolls and coffee. At 10:30am I left Price and drove 35 miles towards Joe’s valley. 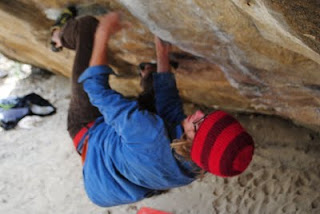 That same day I climbed on my own a little because the others took a rest day. It was strange to boulder after 1 month of trad-climbing but it was a good thing for my body and strength.
The second day I did already a nice V9 named ‘Worse case scenario’. I felt I had to build up my pure power again but it came back fast. 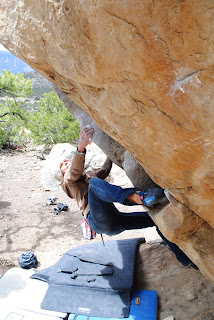 Next day we took a rest day because of the rain, it was raining and even snowing pretty bad! We went to town and later on TJ, Tom and I watched Watchmen in the bus. That was a perfect rainy rest day activity! The next day the weather looked better in the morning. We could climb the whole morning until it started to rain again. We did some beautiful slabs on a boulder half in the river! Really beautiful climbing there. It reminds me a lot at Fontaine Bleau! Doing some nice V8 slabs with tiny footholds and big slopers. So the heavy rain sent us back to the bus to watch another movie. Rain is annoying when you’re psyched!
My 5th day at Joe’s valley was amazing, I flashed 5 V7’s and one I did second go! Everything was just flowing and going! I also did a nice and powerful V9. 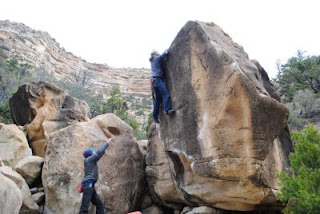 Joe’s valley was a nice relief from all the dessert climbing I did during this trip. Although Joe’s is still high dessert it was still nice to climb between some trees who give that awesome smell you forget when you’re in the low dessert all the time. Most of the boulders are some amazing quality, the sandstone is pretty hard and you can find a lot of different styles. From overhang crimps to hard slabs on slopers! The boulders have a nice bleu color with orange strikes. I could stay here definitely longer but I had to leave if I still wanted to climb in Zion before it’s too hot. I’m sure it was a good thing to do some bouldering for five days in combination with all the trad-climbing. Keep my strength on an acceptable level. 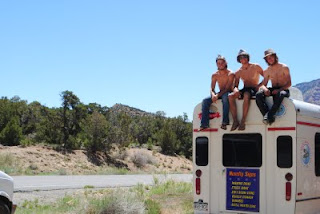 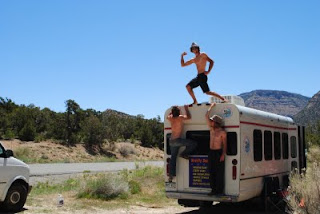 Now I’m in Zion for my first day. I haven’t been in the canyon yet, I’ll do that in an hour! I’m excited. I just don’t have a climbing partner for today. Tomorrow I will climb whit Arturro Calvo, he is a climber who lives in St George. A friend of mine, Lauren Lee, connected me with Arturro. He doesn’t speak much English, most of the time he speaks Spanish. So good for me, I hope to learn a little bit Spanish. I’m planning to try Moonlight Buttress one of these days. Before I try that 10 pitch V 5.12d I want to try something easier to get used to the style!

In Joe’s valley I made my best dinner ever! It was so good that I’ll give the recipe on my blog!

– First you learn how to make a campfire if you don’t know how to do it yet. Wait until you have a lot of nice hot red cols.
– You wrap a whole sweet potato in aluminum foil and throw it in the cols for about 40 minutes.
– Wrap some onion and carrots in some foil too, add some pepper, garlic salt and olive oil! Throw this package of heaven in the fire for about 20 minutes (depends how good your fire is.)
– When the vegetables are almost cooked you take them out of the fire and add some honey and cheddar cheese. Now, throw the package of ultimate heaven back in the fire for 2 minutes!
– When both, potato and vegetables, are ready you take them out of the fire.
– Now you take your time to make heavens bites! First you take a salty cracker, put a slice of sweet potato on top of that cracker. On top of that you put a piece of smoked trout (river fish). And as final touch you put the honey, cheese vegetables on top of the tower of happiness!
– Take that piece of happiness and enjoy your life! 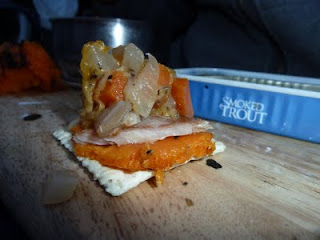 I hope someone will try this because it’s really good! I feel definitely a better person right now! 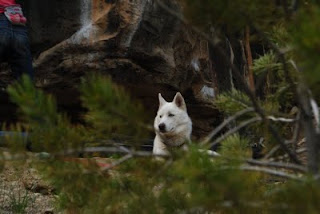