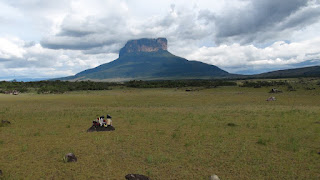 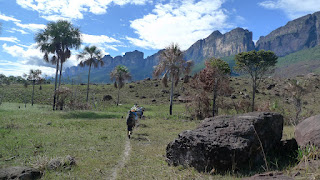 So… What about ‘Niños con Dulce de Leche? Like every expedition you prepare
everything, buy food, organize the food well, etc… Although we had a hard time buying the right food and the right amount, one thing we did amazingly good! After packing, hiking, jugging and climbing a human body is tired and needs a little reward. We bought 4 jars of ‘Dulce de Leche’, this is a sweet and creamy paste from Argentina. Before this trip I did not know what it was but I’ll guarantee you that after this trip I’ll never forget what it is! Four jars, one jar a week, gave each of us right to one spoon after dinner or with our poridge (in case the Indians ate too much of our sugar). This was heaven in our mouth after a day of climbing.

Like after almost every dinner on the wall we also had after every dinner on the ground our spoon full of Dulce. The day after we returned to the ground we left early in the morning with backpacks of at least 40 kg and the Dulce of the evening in our mind. It was a hard but amazing journey back to the local village, Yunek. Against all our expectations we hiked back with those bags in three days without porters. To find the way back was easyer as expected because of our marks in the threes. 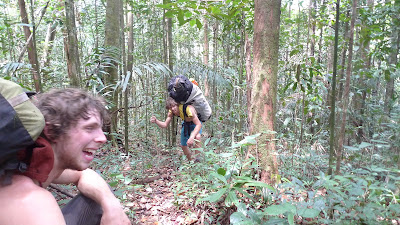 The jungle hike and jungle life was less wild then we had thought. But still we got some story’s. 30 minutes after we left the base of the wall I heard Sam, who was 50 meters ahead, swearing and talking to something. Curious I walked towards him and realised there where some monkeys arround us! Sam had all the right to swear, apparently 5 minutes before I arrived a monkey got mad at Sam and pissed all over him. After I laughed for about another five minutes we descended our way back down followed by three curious monkeys for about 100 meters. 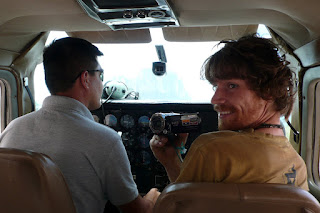 Despite to our fatigue and weakness after a month without much vitamines, the hike back felt good to me. Hard but I enjoyed being in this amazing dreamy place! Proud of our first ascent of one of the steepest walls in the world I afterglowed and enjoyed the nature arround us. When we finally got to Yunek, we relaxed and ate leftovers the whole time. We still had one full day in Yunek before the plane was picking us up. In the evening of this day the Belgian team arrived too in Yunek. They climbed one line on the wall and also returned to get more food that they had left in Yunek. So we spend our last day in the middle of nowhere with the Belgian. It was nice to be able to talk to them instead of screaming to them behind a waterfall. It was interesting to share our experiences with the whole jungle climbing aspect and everything that belongs to it. Against my expectations our experiences with everything on our paths where completely different due to other circumstances. 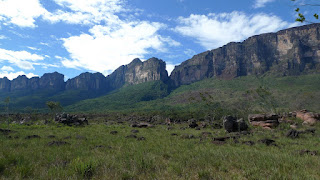 That last morning before our planes left we had a little jam session and said goodbye to the Belgians and the lovely Indians. Hereby I like to thank the Pemón Indians for their hospitality and help to carry bags of their own weight! 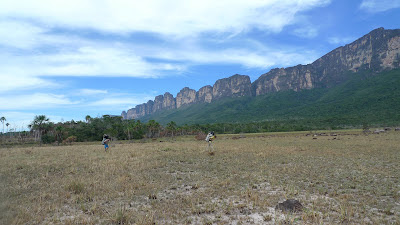 Back in the Posada with our drunk German friend, we ate, played pool, swam in the pool, ate more, barbecued, bought 12 jars of Dulce de Leche, ate perros calientos and churros in Ciudad Bolivar and just enjoyed doing nothing! 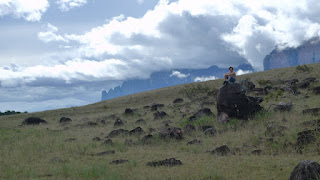 Now, what about ‘Niños con Armas’?

In August 2011 I ended my USA/Canada trip in Squamish. The day I left Squamish Mason told me of this amazing steep bigwall in the jungle of Canaima National Park in southern Venezuela on a table mountain named ‘Amuri Tepuy’. He explaind me how he was planning an expedition towards this wall with two British guys and that they were searching for a fourth person. With all my enthousiasm I immidiatly said that I was psyched to join them. Back in Belgium I decided not to start studying and to join Mason, Sam and George on this expedition. One of the best decisions I made the past 20 years. We where told of this amazing big overhanging wall on this Tepuy by British bigwall climber John Arran, who even claimed this might be the steepest bigwall in the world. This Tepuy had two earlyer ascends next to the steep amphitheatre, so this steep part of the tepuy was still unclimbed.

February 2012 a team that existed out of two Brits, one Gringo and myself climbed in 15 days total and 12 days on the wall a new line behind the waterfall Tuyuren named ‘Kids with Guns’ 5.13a, A3. We climbed almost all the 21 pitches free and might have done the steepest bigwall in the world! Despite the scary, loose pitches and the lack of gear at some places we only placed 6 bolts, 2 protection bolts and 4 belay bolts, on a 450 – 500 meter wall. Our guess of the steepness of the wall is that it hangs over 100 meter, where the waterfall hits the ground. 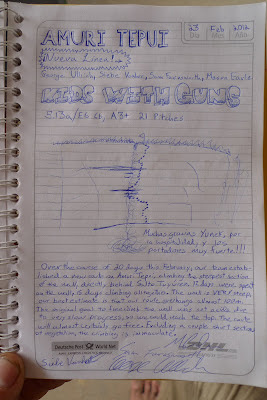 I’m psyched to have done this first ascent bigwall as my first real bigwall with some nice guys. Altough it was hard for me to understand the Brits, I think our communication was great and the teamwork to reach our goal was present. Thanks to you guys for the great adventure!

I’m definetely also going to thank Petzl to help me realise this trip!

So here as promised: Amazing pictures! 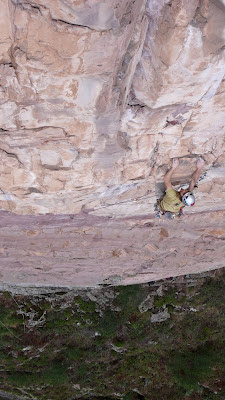 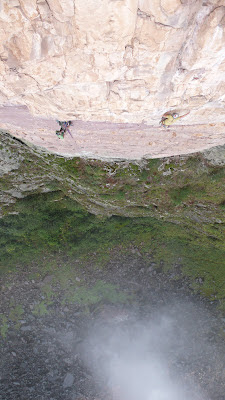 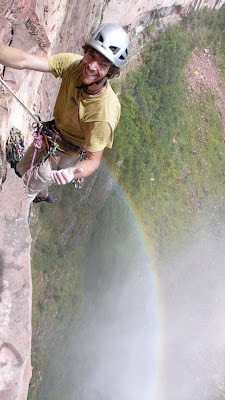 Three pictures above: me climbing the third scary pitch! 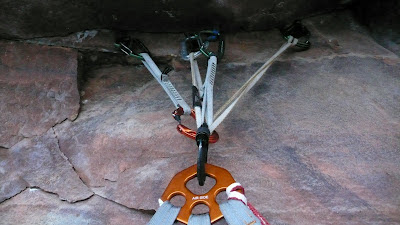 This is the anker of the portaledge me and Mason slept on! Some upside down pitons and a camhook! Scary! 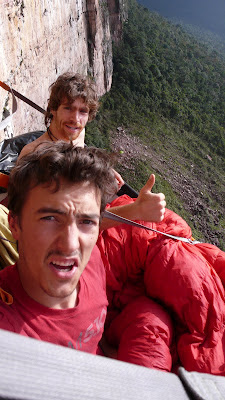 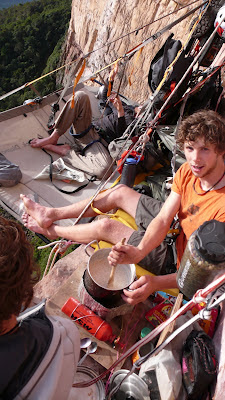 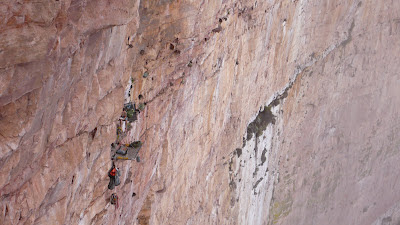 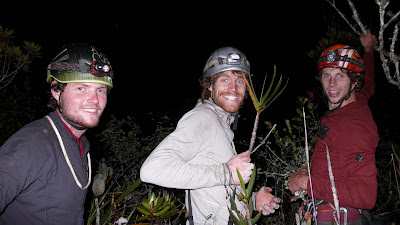 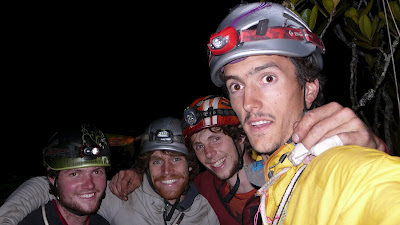 On the top at night! Happy, hungry and tired! 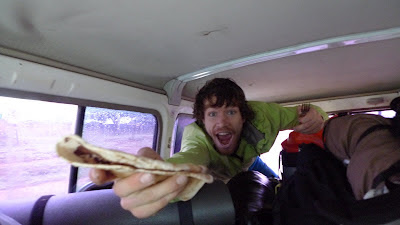 Someone wants a tortilla con nutella? 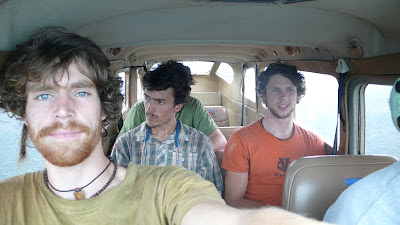 Relaxed in the Cessna! 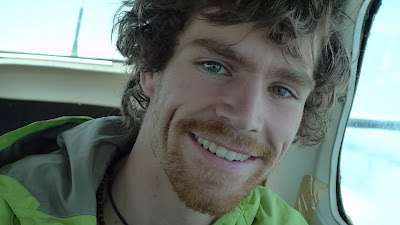 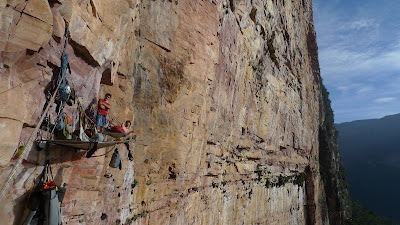 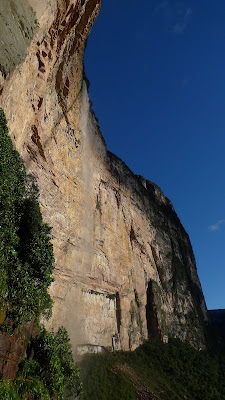 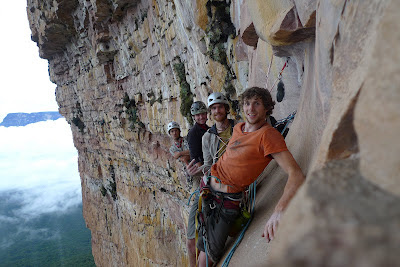 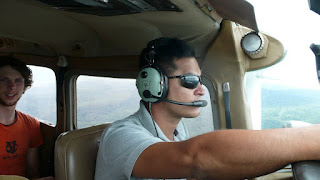 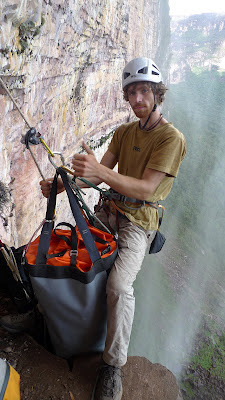 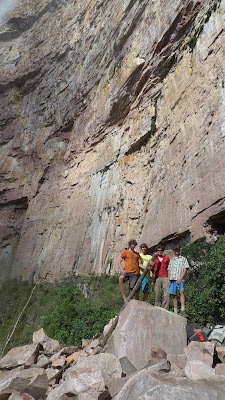