After our last car adventure the car showed some good behavior and didn’t let us down anymore! We’ve been climbing in Smith Rock for three days now. It’s an amazing place. After Yosemite it looks small but it isn’t, it’s still 6 times bigger as Freyr.
When we arrived we were immediately invited to a BBQ of a friend of Ryan. We walked around in Bend and had a nice and easy afternoon. 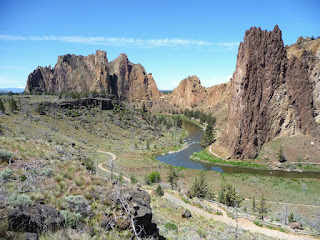 In Smith Rock State Park you can do a little bit of everything; sport climbing, trad-climbing, bouldering and even multi-pitch trad or mixed. The Park is not only for climbers, there is also a lot of tourist walking around. Mostly they walk around where most of the sport climbing is, if you go to the upper and lower gorges to do some trad-climbing you’ll be alone!

Our first day climbing was really easy and we discovered the area a little bit. We also had to get used to the heat. After Yosemite we arrived here in a heat of 90°F ( 32°C).
We did some sport climbing the first day. Really funny to do that again, it is hard to get used to it again. Definitely here in Smith Rock where the grades are really hard and the holds small. The climbing style is really special. It is all vertical or slightly overhanging walls with small crimps. The rock type is basalt but way different of the basalt in Jailhouse. In this basalt there are a lot of little rocks of another kind sticking out, a little like conglomerate. So you’re climbing on small pockets or on small crimps! No jugs, that doesn’t exists here. 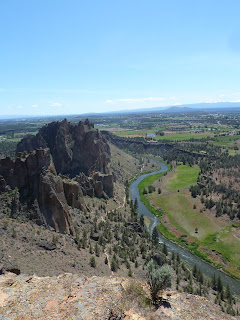 Because of the old age of the sport climbing here the grading system is pretty hard and tough! Also the first 8c+ of the US you can find here. Some of you probably heard of it, it’s called ‘Just Do It’. It’s an amazingly hard line on the Monkey face, a big loose pillar that looks like a monkey face! Can you see it? 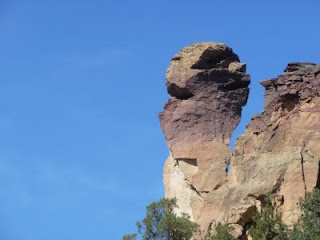 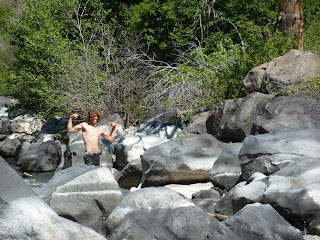 The second day we went to the Lower Gorge. This is one of the two big Gorges in Smith Rock. Without much planning we walked into the gorge and saw that the side we were on was completely in the sun still. So we decided to cross the (high) river, which was not an easy job! After trying to cross that river for an hour we gave up because the other side was also slightly getting in the sun. We chilled in the river for an hour more and waited until our side of the river got in the sun. 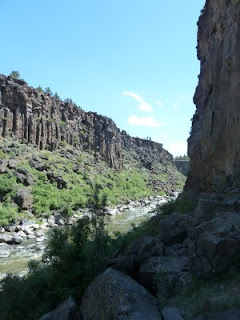 The basalt in this canyon is again completely different than the sport climbing in Smith or Jailhouse. The crack’s are all between big columns/pillars 1 meter from each other. The climbing is really technically with lots of face holds and stemming between the pillars. I’ve put some pictures for you to get a better view of it! I did two 11a’s (6b+) who where both crazy technical and scary above small nuts! I tried one 11b (6c) but fell on the end, it was really hard to place gear and the moves were incredibly technical. I’ve never climbed on a rock where you need so much technique. If you thing Freyr is hard, this is 3 times as difficult and technical. Crazy that I’m talking about 6’s instead of grades around 8a/b. I’m getting lots of respect for the older generations! 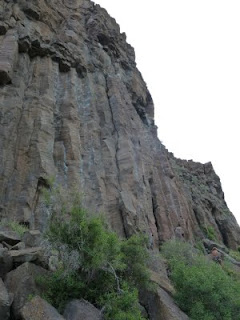 Yesterday we did some single pitches sport first. After that we went up the monkey face. We did the line called ‘Monkey Space’ It’s only 3 pitches but it’s exposed and in a beautiful surrounding! On top of the Monkey Face we hanged out a little and enjoyed the exposure and the incredible view! 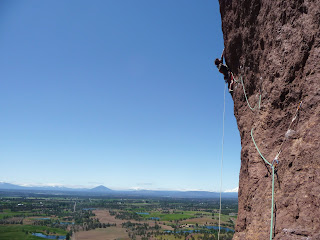 Today we did some necessary rest day activities like changing tires of my van and laundry. I hope to get some good second hands tires!
This evening we’re going towards ‘Trout Creek’ to do two more days of trad-climbing, again on basalt splitters! 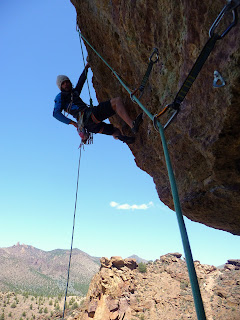 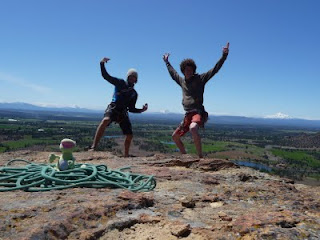 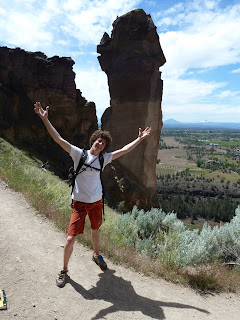 Me fighting with a baby ratlle snake! The most dangerous! No joke! 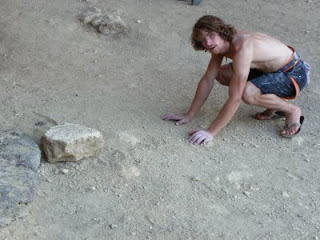 Flo = Tourist and photographer of all! Me = loosing my head in the chevy engine while replacing the radiator hose! 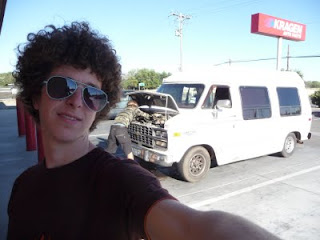 Friendly old man number 2 and I! 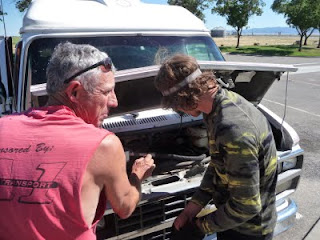 Yeah Flo, thanks a lot for all your pictures!