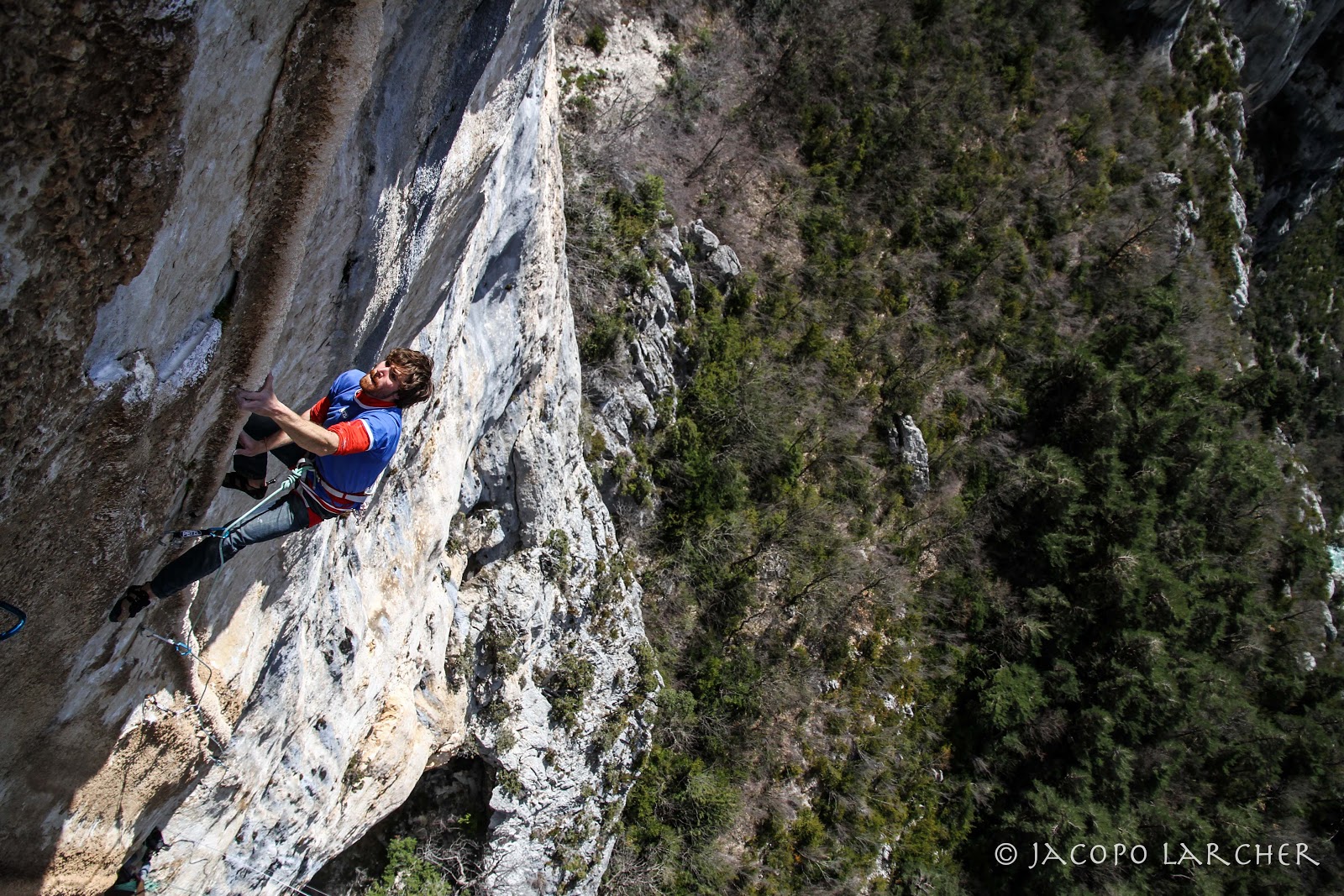 The Verdon was great! After Millau and the world cup bouldering Jacopo and I were glad to be out in nature again to enjoy some climbing and amazing environment. The Verdon is really big, when I saw it I understood why its second name is ‘The grand canyon of Europe’.
From the first day we both saw one obvious line in the canyon: ‘Tom et je Ris’ (8b+). Jacopo and I both got to know the Verdon and especially the amazing line because of the famous poster of Nico on the big (and sharp) tufa’s of ‘Tom et je Ris’ (read also Tom et Jerry). 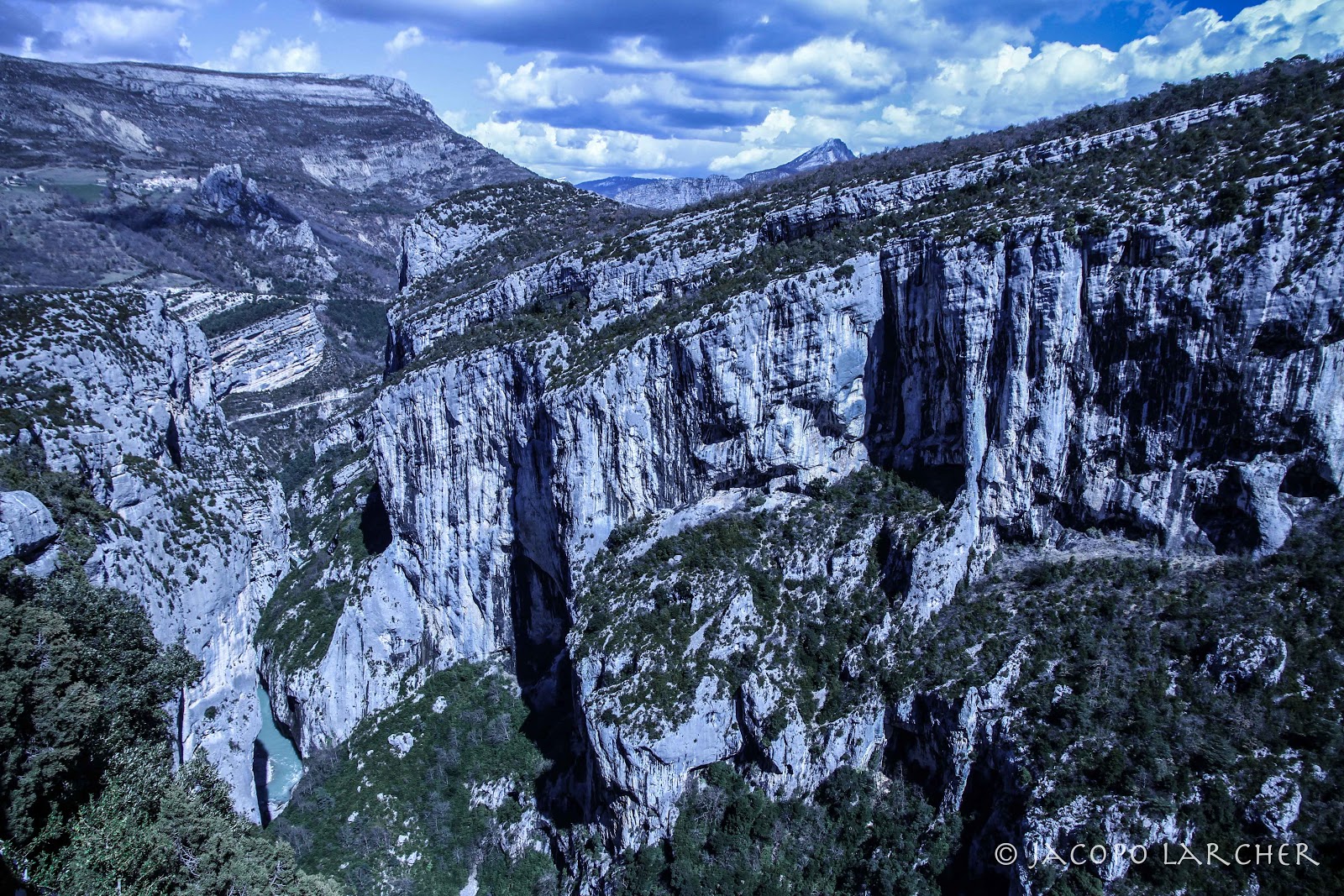 After we did some classical multipitch routes on the technical and vertical walls of the Verdon the tufa line was dry and waiting to be climbed. The climb is on the east side of the canyon and has an approach of 1 hour and 10 minutes. You have to approach the line from above and it is really hard to find the anker of the line. Before going up we searched some information about the approach on the internet, apparently it was hard to find the anker and a lot of people rappelled down the wrong line on their first go. 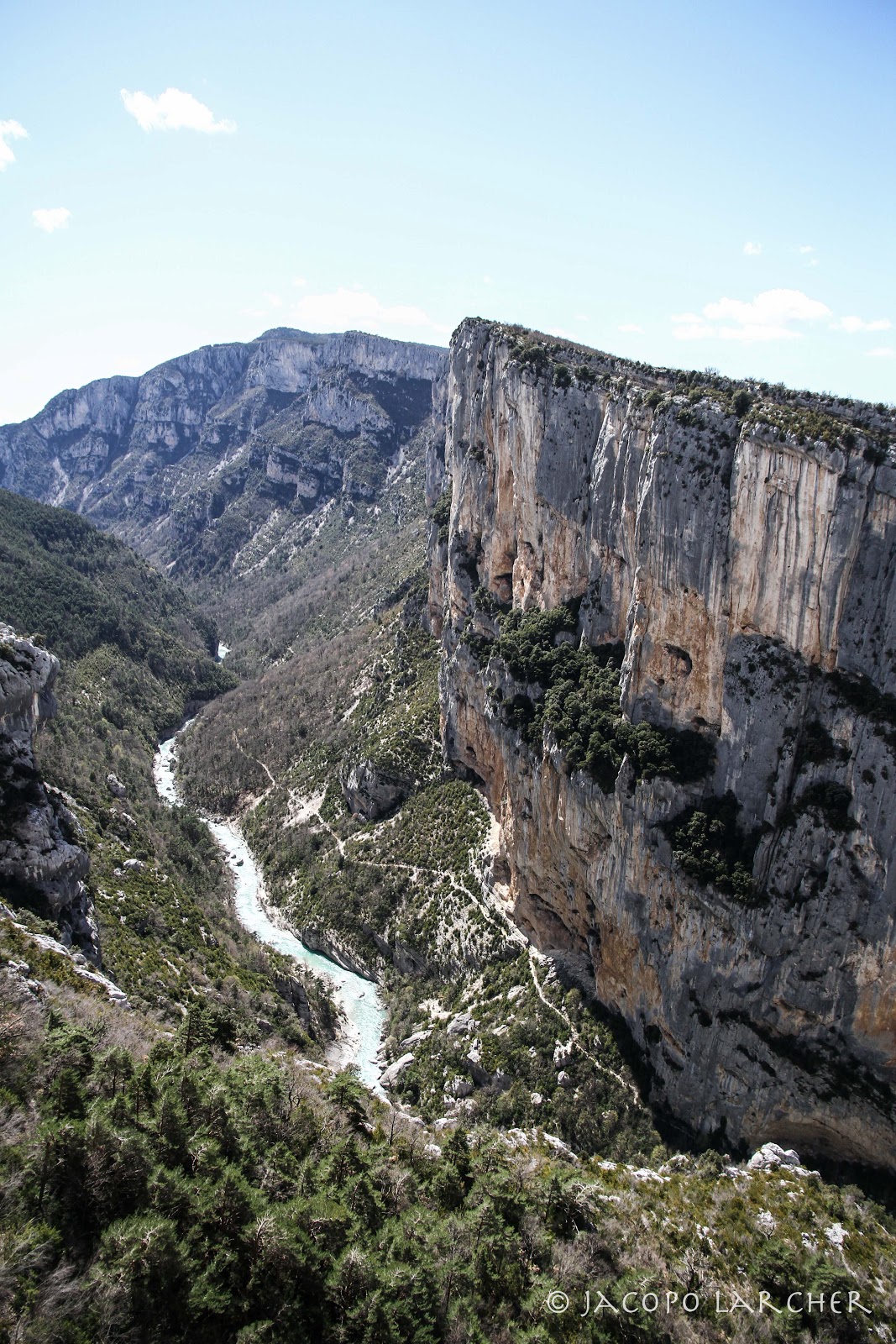 We were not the only ones in the Verdon, the other climbers mostly were Belgians, and this resulted in a fun group on ‘Camping à la Ferme’ in La Palud. Two of those were David Leduc and the forever travelling Tim De Dobbeleer. Always a lot of fun with those Belgians! On his last day, David joined us on the hike, search and try of Tom et je Ris.
Once we found the anker, we rappelled down de amazing 60 meter tufa line into open space. Due to the steep wall we had to do an airy rappel down to the anker where the route starts. Rappelling down the beautiful line with perfect limestone tufa’s and the bolts nice and far apart was really intimidating. I was the first one trying the line, warming up on it because there is nothing else to warm up on, I went from bolt to bolt.
The moves where amazing, following a slopy tufa with some ‘sharp’ crimps going into three other perfect tufa’s. Climbing from one tufa to the next some endurance climbing and little cruxes resulted in one pumpy journey. Because of the huge length of the route and the bulgy overhang it was impossible to see the belayer from halfway up (30m). This gave me an amazingly free feeling, climbing on my own in a hard route somewhere high up, magically. You really have to do it al on your own! 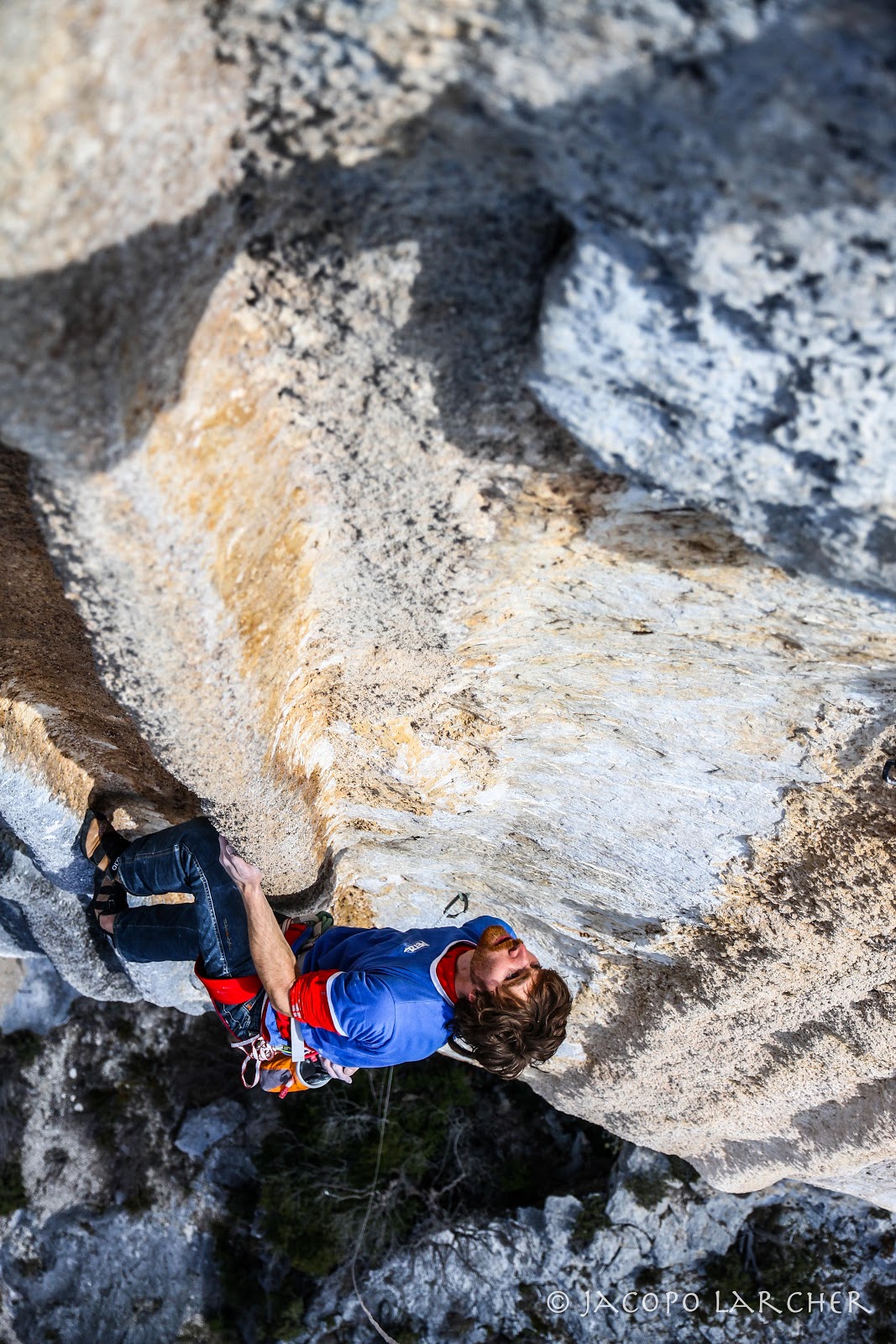 After that first day Jacopo and me where psyched to try this intimidating line again. On our second day we got to know the moves a little better and could place the many and almost similar sequences in a row. Still we couldn’t send the line. After only two try’s each day my skin was completely destroyed, it was like I had been touching some coral riffs in the sea.
We took one day off, ate a lot of French bread and pastries, drank too much coffee and enjoyed one of the first hot and not windy days! That same evening with our belly’s full of pastries we hiked up the hill and slept at the top of Tom et je Ris to give it our last tries the following morning. We did this because we had to leave the next day towards Bergamo (IT) to catch our flight towards Kalymnos (Greece).
Waking up in nature on top of a big canyon with the huge birds flying by we prepared for our last tries. We both gave the line one warm-up try where after Jacopo gave it a burn. Walking his way up through the hard start he realised to fight in the end against his exploding arms and made an ascent. Now it was my turn, happy for Jacopo but focussed for my try I gave it everything. Fighting through the hard sections and shaking on the many rests I managed to send this line too.
This is one of the best sport climbing lines I’ve ever climbed in my life. The approach, the airy rappel, the intimidating line, the height, the steepness, the big rocky canyon, the far spaced bolts, the climbing style and the perfect rock made this climbing experience better then every other sport climb. It’s all about ‘everything’!
After our Verdon experiences we left that same last day towards Bergamo, slept on the side of the road and caught our flight the next morning with ‘The North Face’ team towards Kalymnos. No climbing this time, but searching the island for a new crag where we were going to bolt many new lines for the ‘The North Face Kalymnos Climbing Festival.’
More about that on the next post … 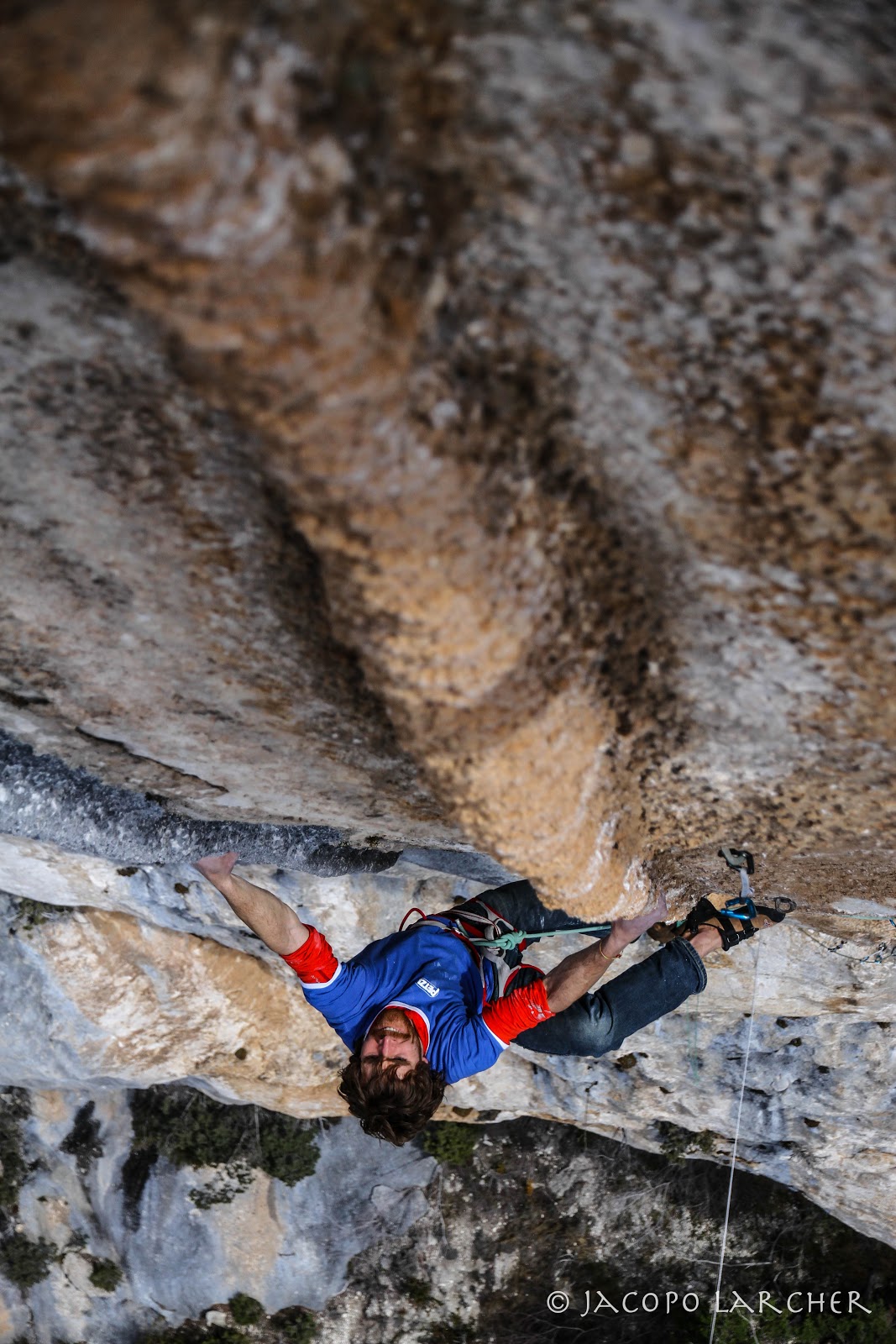