Car adventures and playing around on El Cap!

Car adventures and playing around on El Cap! 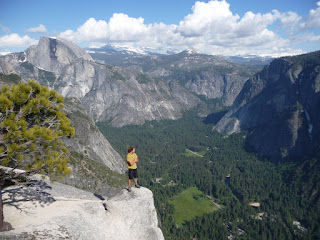 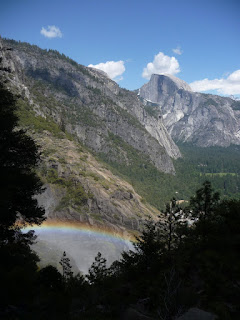 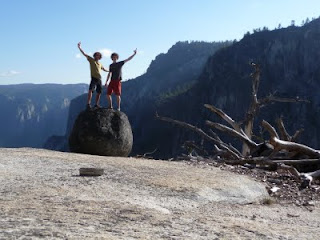 The big and tiring days weren’t ending last week. After our Astroman ascent we took a nice and easy rest day. The two days after that we did some cragging and hiked up the Yosemite Falls trail to enjoy the view as you can see on the pictures. We ran down the Yosemite falls trail in one hour! Tell me if you can do better!
The next day we took another rest day because we felt really weak. That rest day we planned our next goal for the next day. We prepared our self to do ‘West Face’ of El Cap in one day! That rest day we went to Sonora to do some groceries and to do an oil change. Groceries went perfect; the oil change was another story! 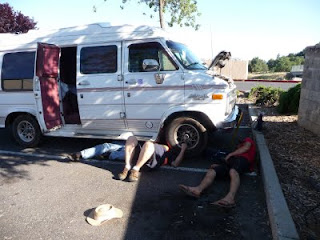 We went to a wal-mart to change the oil because there was no other place available that day. I’m not a fan of wal-mart but the oil change had to be done. After 1.5 hours they were finally done (it takes normally 10 minutes). I go inside, pay the bill, get my keys and go to my car. When I tried to start that old piece of driving metal it just didn’t do anything, no reaction, no life. I was alone because Flo was still surfing pretty hard on the internet. So I said to myself: ‘Fuck, those wal-mart shit holes fuck up my car!’ I went back inside and asked for some more information. I even talked to the manager and tried not to be the most annoying customer! When the manager finally moved his obese ass he told me his workers are no mechanics and only change the oil and check tires and the battery. I taught it was suspicious because they recommended me to buy a new battery. So after some discussion I got sick of them and tried to cal another garage or mechanic nearby. It was already 4:30pm so everything was closing soon. With some stress I called around but with no success. Then suddenly an older man who lived in Sonora saw we were foreigners and asked what was going on. I explained our problem, he was willing to help us out of that chit we walked into an hour before. He was with the triple A (AAA) and was willing to give us one of the four AAA services he had in a year! After he called them, a big truck was coming to pick up my van. The triple A looked at the problem first and found out what was wrong. A metal cable in the starter was broken and he told us it was easy to fix. The helpful guy, John, bought the supply’s to repair the car. After the triple A guy started the car we drove to John’s house where we first were served with a nice and cold beer. While drinking we crawled all under the car and fixed the starter! At 7:30pm we could finally leave Sonora. We want to thank John a lot! It’s so nice as a foreigner to be helped if you’re having problems in another country. We wanted to go back to the valley to do West Face the next day. So this was again a car adventure that belongs to my trip. 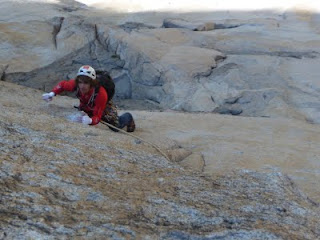 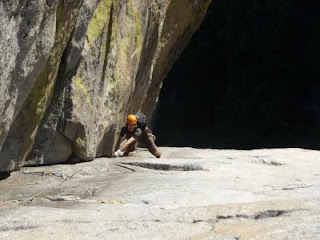 West Face is one of the more popular 5.11 free-climb’s in the valley. It’s also a shorter Big Wall on El Capitan. With his 18 pitches you can do it on one day and climb everything free. That day we woke up at 4:30am to get ready for West Face. After a long and steep hike we left the base of the route at 7:30am. The first two pitches, the 6th and 7th are the crux pitches, after that it’s all 5.10 or less. The first pitches we lead very well without any problems. I fell once in the 6th pitch, my foot slipped off, didn’t saw the right hands. The quality of the rock was way different compared to the rock quality of the nose. It was slicker because of the water who runs down there more often. 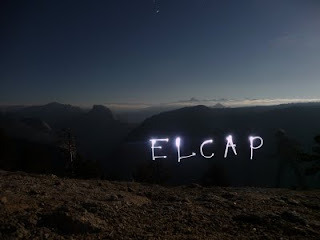 We arrived at the summit in the dark at 9pm with a full moon shining in our tired faces! The descent of El Cap is hard if you don’t know it and even harder in the dark. We enjoyed the summit for a while. With the amazing full moon we could see a lot and tried the descent for about an hour until we decided it was way too dangerous to continue. We went back up to the summit where we decided to sleep underneath a tree in an amazing open rock land space. We weren’t prepared to sleep at the summit so didn’t have much up there. We both slept on our rope spread out with long pants, T-shirt and a sweater. We had one down jacked for both of us!
A little away from our sleeping tree we found some snow we used to drink a little! It wasn’t a first class night, but it was a beautiful full moon night on top of El Capitan we’ll both remember for a long time. 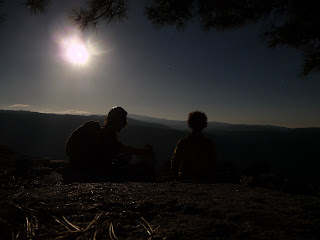 We slept about 3 hours (or less) when we woke up because of the sunrise. We couldn’t wait until the sun arrived to give us some warmth. This was one of the most amazing mornings in my life. We were both super tired but it was too beautiful to be sleeping. That morning it took us 3 hours to go down. Back at Camp 4 we ate for about 3 hours before we chilled out in the hammock or tent. After sleeping and hanging out the whole day I got prepared for the next goal. I was going to climb up to El Cap Spire in the famous route ‘Freerider’ with Niels the rescue guy. Flo was taking an easy day of climbing and did a couple of pitches with a German climber, Andreas. 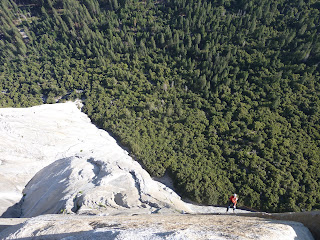 So Niels and I played around for about 16 hours in Freerider! This amazing day started at 3:30am, after making a good porridge and cutting an apple with a machete we left Camp 4. At 5am we left the base of the climb with just enough light! We cruised the first ten pitches really fast up to the Mammoth ledges. The rhythm we had was really good and fast. It’s nice when things go efficient and fast. Most of the time you lose time at the belay stations. But with a good system you can go more efficient. After the mammoth ledges you make a small rappel and traverse a little. From then on all the ‘wide’ stuff is coming. Big offwidth’s and unprotected chimneys at 200 meter high are waiting for you. Niels (offwidth master) lead the Hollow Flake and I followed. Scary and not much protection, there are pitches you just don’t want to fall or you’re in bad shit! The pitch after the Hollow Flake is an almost unprotected chimney with an easy grade of 5.7! Crazy…, in sport climbing I warm up in 5.12’s. Here I was almost crying in a 5.7! ‘Falling is no option!’
Two pitches after the chimney, Niels lead ‘The Ear’, another chimney but even more exposed! In this one I found a BD # 4.5 (same size as the new BD #5). Awesome!
After this pitch the real deal was coming! The ‘Monster Offwidth’ was ready to eat our body parts! This is the most impressive line I’ve seen in my whole life. A huge crack straight up for about 60 meters with on both sides just a smooth face without any structures or holds! And all this really exposed 400 meters of the ground! Perfect and intimidating line. Not much people are fan of this kind of climbing but I like it. I still think it is the most physical climbing that exists! Respect for the good offwidth climbers! (Niels!)

Me at the end of the ‘Monster Offwidth’ 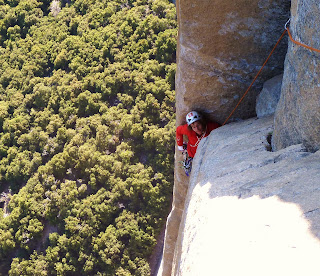 After chilling out on El Cap spire we raped down the whole route. At 9pm we arrived at the ground and were both completely done climbing and really tired. I wasn’t really on earth anymore and felt more like a ghost! Everything was hurting and falling of my feet was possible. Never felt like that. The next day only eating and sleeping was accepted. I didn’t move from my crashpad and slept with my head in the bear box! I was lucky to have a Flo next to me who could feed me a little! Thanks man.

After a nice and amusing evening at YOSAR (Yosemite Search and Rescue) Camp we left the Valley yesterday. Now we are on our way to Smith Rock, Oregon, for some crimpy sport climbing!

Yesterday we didn’t do much of the route because we had again some car troubles. When suddenly the car reacted strange we pulled out at a rest area. When I stopped the car the whole engine was smoking like shit! A little stress came up but we both stayed calm and reacted well. By now we know we have a good karma around us and optimism works the best. When we led the engine cool down, again, a nice American man saw we had some problems and was willing to spend some time with us to fix the car. He found out there was an obvious hole in the hose of the radiator, that’s why all the water escaped and the engine overheated! The friendly American gave me some tools from in his car and told me what to do. I’ve disconnected the hose and cut where the hole was. After that I’ve connected the shorter hose again. After that the engine worked perfect again. But because I didn’t want to drive around with so much tension on the hose we went to an Auto parts store and bought a new hose. After I’ve put the new hose on, the car drove perfect and we continued our journey!

Now we are sitting in some grass at a coffee shop in Bend, a city at Oregon. Tonight we’ll sleep at Rian Palo’s place that lives here in Bend. I know Rian from Rifle on my last trip through the states. I know Bend is a beautiful little town. We’ll probably walk a little bit around here before we go climbing tomorrow.

So this was quite a story but I hope you enjoyed reading it! 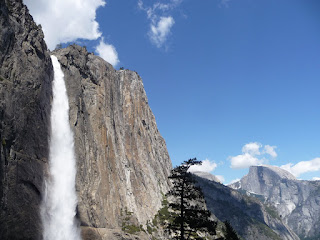 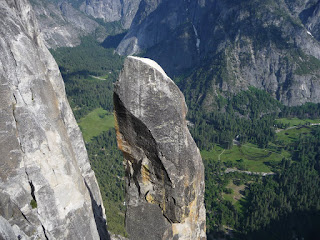 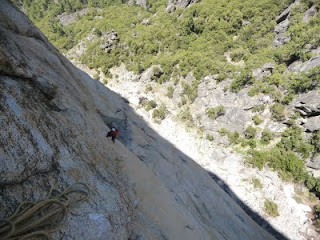 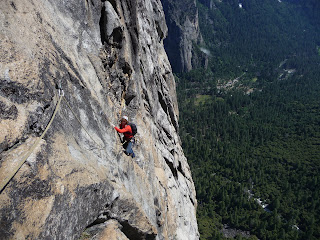 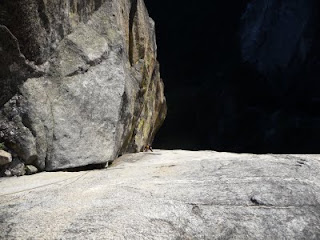 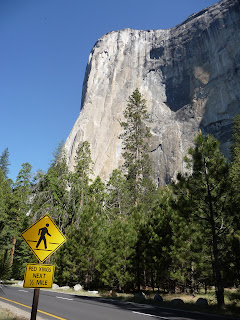 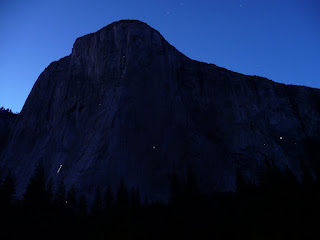 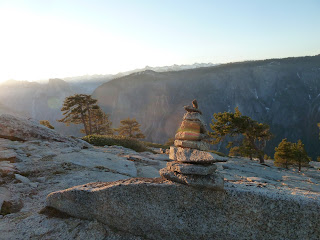 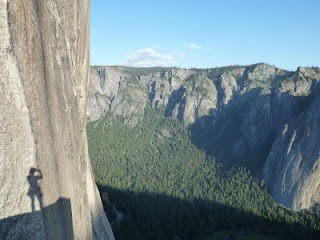 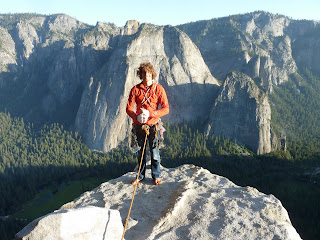