February 8, 2011 In Uncategorized By admin 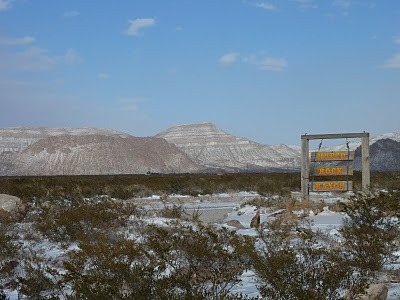 It’s been a long time right now. After my last post we’ve been thru a really cold time here in Hueco. We couldn’t climb for three days because of the cold weather, so we were obligated to grow some skin. At night the coldest temperature was -20°C. Luckily the camp host invited us in the house where we could sleep for 2 nights. We stayed in the house playing a lot of games like the swiss game, Meier. Some game with dices. I lost like I’m used to losing in games, my punishment was making a nice snowman. Guess what, I did it. I made a nice onsite ascent of a 2D snowman! 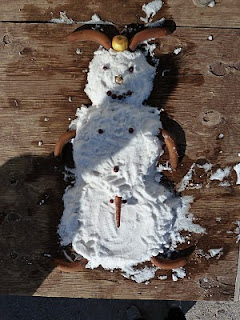 The cold brought a lot of bad luck for a lot of people in the US. In El Paso and here the electricity went out a lot, all water pipes in a lot of houses broke because of the frozen water inside it whereby a lot of people where running out of water. Even all the water in the supermarkets was sold out. They say it where the coldest days in history!

After those cold days we went climbing, there still was some snow on top of the boulders and all-around. Because of the cold and three days of sitting on my ass it wasn’t a perfect climbing day but I enjoyed it!
The second day we all went to East Mountain to see some new boulders! It was amazing, each mountain is new and full of boulders.
Me, Jan, Nico and Thierri tried one of the nicest boulders in the park, called Sunshine (V11). None of us could do it but I’m sure next time it will work. This is a nice boulder that’s completely my style on some nice slopers. After that I almost onsite ’10-10’, an easy V10. I did it some tries after it.
I did a whole bunch of new easier problems and another classic one named ‘Something Different’, V8. For me it felt really hard for the grade, but it was worth it. 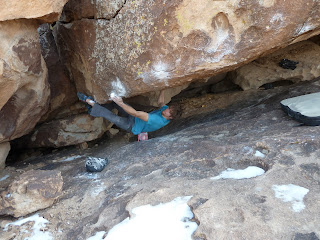 Sunday it was the last day for Nico, Tim and Thierri. They climbed a little bit and went to the airport to look for an hotel to spent the night. In the hotel we could finally take a shower. For me it was 8 days ago I had showered. No problem, nobody who smells it here!
It was even better than a shower, we could take a jacuzzi and swim in a nice warm outdoor swimming pool.

Today was a great climbing day. The jacuzzi had made my muscles ready for a new climbing day. I went on a tour on East Mountain and The Spur with two nice guys who are living in a mini school bus for seven moths like me. Those are the guys I’ll probably will join to Flagstaff and Red Rocks.
First I took revenge on the boulder where I fell and twisted my ankles 10 days ago. It was a V9 called Hector. I did it first try of the day. After that I on sited two long V8’s and did an other classic problem. ‘The Egg’, V9, super nice line on slopers on a boulder that looks like an egg.
I’m ready for another good day tomorrow! 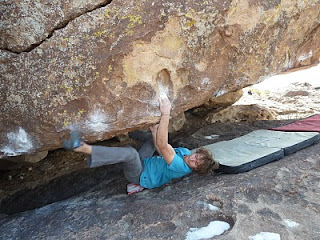 Yesterday I took a look in the guide book of Indian Creek. That place looks amazing. I’m looking forward to go there and place some gear in nasty cracks! 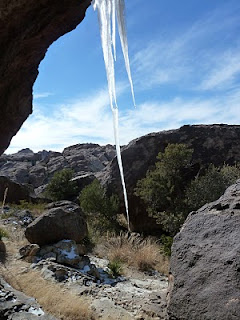