Decisions after a great summer in Europe!

September 4, 2012 In Uncategorized By admin

Decisions after a great summer in Europe!

Back home since my big trip to South-America I haven’t been home really. I climbed around Europe the last few months and have been busy making some future plans. It has been over two years right now that I’m traveling and climbing around the world. Those two years where amazing and full of great experiences, I see those years aren’t lost at all. I feel so rich of experiences right now and feel more balanced in the life we live in right now. Although I know there is way more to discover and learn in the world. Now, at an age of almost 21, I feel ready to make some more decisions about the future.

Some future plans
When I was 18 the question ‘What are you going to study?’ looked like the only question people could ask or were allowed to ask. With an age of 18 the only thing I had seen was high school and a little bit of the world traveling around for climbing during school vacations. I wasn’t ready to study that time, there was – and still is – so much to learn and climb. If I study right now I feel I will do it way different and most of all efficient compared with two years ago. What I really want to say is that I only can make a good choice of study right now because I’ve seen and experienced much more than at an age of 18.
So on September 17th I’ll start my study, Social Work, at the SSH (Sociaal School Heverlee) in Leuven, the city where I come from. But… There is a big BUT …
I will still be able to climb quite a bunch because I will separate these study’s over more years then normal and I’ll have a little different study program and flexibility’s. So if I feel this study is something I really like after a couple of months I’ll be able to study and combine climbing in a perfect way!
Summer 2012
This summer I’ve been traveling a little bit around Europe, it had been a long time I made some trips in my own continent.
In June I went, like you can see on one of my last blog posts, to Céüse. I forgot what an amazing climbing area it was, the routes combines technical – and physical skills in such a delicate way.
In July I joined the exchange trip between the ‘Climb Cool Team’ (Belgium) and the ‘Cork Climbing Team’ from Ireland. This trip was an idea of Richard Cussen from the Cork Climbing Team with as goal an exchange of young climbers from Belgium and Ireland to make contact with each other, the language and another climbing-culture.
The first week, the Belgium crew met up with the Ireland crew in Dublin and left towards some famous trad-climbing areas of Ireland. With the whole group of youngsters we climbed in ‘Fairhead’ for three days followed by four days of climbing in ‘The Burren’ on sector Ailledee. Two classical climbing areas un Ireland. Fairhead is famous for it’s complicated technical climbs and the interesting protection on this basalt rock near the north coast of Ireland. Ailledee is a complete different style, here you climb on limestone what results in a sketchy climbing style where you only can place nuts (stoppers) because of sliding Camelot’s.

The second week the Ireland crew came to Belgium to discover our limestone sport climbing in Freyr. But not only the Freyr rock was interesting for them, the climbing gyms we have in Belgium had to be tried. Thanks to this original exchange we could learn from both sides. We exchanged the spirits of a sport-climber and a trad-climber. The Ireland climbing is famous for it’s pure form and spirit, it will be hard to find any bolts on this island. Some pictures of this trip will follow. 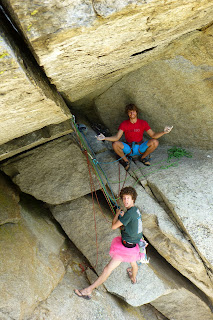 After the Ireland trip I did not join the Belgium part of the exchange but went towards Valle dell’Orco to join Florian Castagne, Jonathan Dewanne and Olivier Delcosse to discover what they call the little Yosemite of Europe in Italy. After one day of climbing in the granite Orco valley Jonathan had some bad luck and fell on his heel resulting in a big bone fracture. The rescue team of Jonathan’s accident existed out of us and some motivated Italian climbers who carried him a part of the way towards the car. Jonathan had to spent the rest of his trip in the hospital and was then transferred to Belgium. Good luck with the recovery Jonathan.

The days after the accident the rest of the crew did it a little easier. The rest of the week we climbed some classic multi-pitch lines and a nice single pitch, Legoland. This is a roof crack that’s about 6 meter long with perfect hand-crack size. I realised to sent this line on sight were after Olivier and Flo tried it to a couple of times.

The last day of the Orco week Flo did some highlining on a complete natural protected highline crossing the river in the valley. This was amazing, I tried it but could not even stand up right. This was yet one step to high in difficulty for me. At the end of the day Flo and Olivier joined me trying the famous crack ‘Greenspit’ (8b). I just heard about this line and wanted to try it. Without any expectations I tried to figure out the moves. This line motivated me so much that I immediately new I had to come back to project this climb.

Ending this trip we passed by Chamonix to hang out one day while Olivier showed us the best bars in town.
In Chamonix I met up with two good friends from high school, Emilio Crabbé and Florian De Bont who also started climbing, for a trip of two weeks hanging out, climb and do other stuff. This trip was the first time since really long that I did almost not climb. It was a real relaxing trip, a little break of climbing for me. Although, we climbed a little bit in the region of Briançon, France. We did some sport climbing and I even took them on a nice multi-pitch, a little hot in the sun with 35°C but fun guaranteed with those high school hippies. It felt nice to learn someone the tricks of climbing and I enjoyed seeing them being so motivated to learn. I even learned a lot myself explaining all the basics again.
The last two weeks of August I left together with Sean Villanueva O’Driscoll on a little trip to Switzerland and Italy. The report of this trip you’ll find in the next blogpost.
This was my summer, I kind of liked the way of traveling right now in Europe where I always left some weeks and then came back for a little pause. Now I’m curious about how my study’s are going to go the next months. I’m searching for a way to combine the climbing and studying I prefer. We’ll see this works, at least I’m excited to start this study.