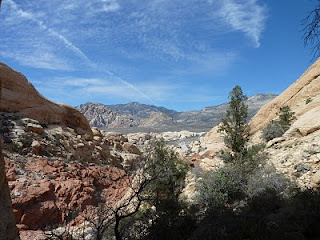 Time is going fast hé? A sign things are going well! Already 5 days ago that I wrote something on my blog! I had some great times last days. Everything is coming together.

What’s up Ho? Mount potasi is going on!

Tuesday I went with David Gibbons, an awesome guy who lives now in Vegas, to Mt Potasi. It’s also near Vegas. It’s is a big limestone cave on the top of a mountain. The dirt road to it is really aggressive; I don’t think I can drive there with my van. Or I need to change to a redneck with too much money and put huge tires and hydraulics underneath my Chevy. If I do that I also put a nice tattoo of a wolf on my back and carry a shotgun. 🙂
So where was I …?
Suddenly we needed to stop Dave’s Honda Element and walk further. The walk in total was one hour. In this one hour, 40 minutes is steep uphill. We were only dying a little bit.

The cave is really big like you can see on the pictures! (pictures are coming) A lot of the routes are chipped. The style was really bouldery with lots of pinches. It took me a while to get used to the limestone again. This style reminds me to Rifle, so it felt quite hard. I prefer the sandstone and crimpy style in Red Rock! I had an easy day and just did a 7c and a 7c+. 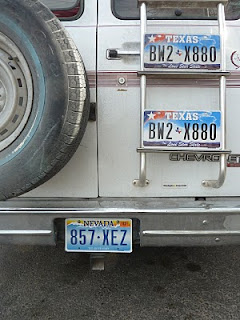 Monday and Wednesday I drove my ass around with my smoggy mobile to do something about that smog issue and to get my license plate!
Monday I brought my Van to a garage where they could do something about the smog, so now I passed the smog test! The engine has a lot of new stuff in it. He uses less gas too now!
While they were working on my Van I went doing some Frisbee Golf (Frolf) with Tom and Mike. Such a funny sport, I suck at it so I’ll keep on climbing.

Wednesday I went to the DMV office and received my Nevada license plate! Yeah, I’m so happy now! Driving around without worries (I hope). Just climb and live! 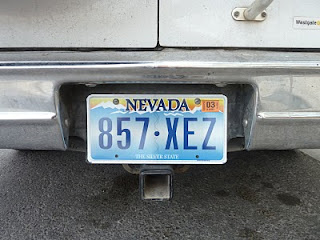 Just win a comp, whatever! 🙂

Wednesday night there was a boulder competition in Red Rock climbing gym in Vegas. I met a lot of nice new people and found some new climbing partners because my Colorado friends Mike and Tom left to Bishop. I won the comp by doing almost all the hardest boulders in the gym. I don’t know what happened but I’m in good shape! I won a hundred dollars, good because I needed it for the car! The climbers here in Vegas now know the Belgian! (That’s how they called me at the comp.) 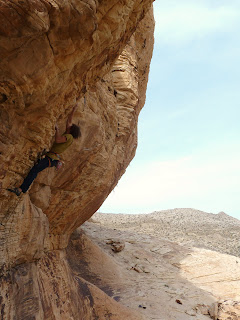 Doing routes from left to right!

Today I went climbing in Red Rocks with Heather and Chris, two nice people I met on Mt Potasi and on the competition. I had such a funny day, laughing and when I wasn’t, I climbed! That’s how it needs to be!
We went to the Trophy wall where I did almost all the routes. Started with 7b and 7b+ on sight. After that I did a 7c flash and a 7c+ third go. Yeah last one wasn’t so good. Then on the end of the day I did another 7c+ on sight and one 7c+ flash with only 5 minutes rest between them! Awesome training/sending day! Have nothing else to do anymore here. 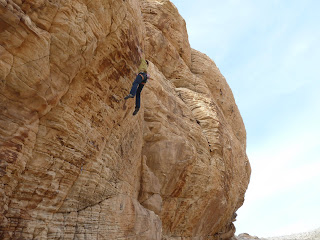 For the moment I’m staying at David’s place. He’s living together with some nice other climbers. Really guest free. It feels good to watch television, sit in a couch, cook on a real stove and the best …. take a shower. 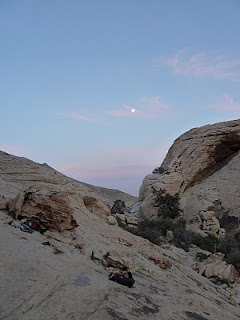 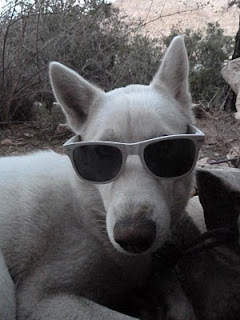 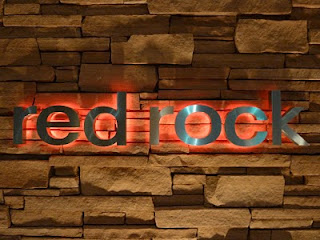