Yosemite – up to the Big Walls

Yosemite – up to the Big Walls 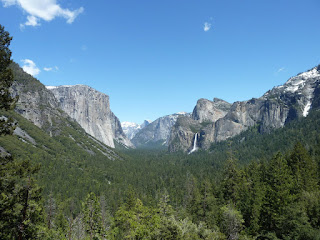 Now it really has been a long time ago since I’ve let you know I’m not a fat-ass yet! So after I was in Las Vegas to clean my car, clothes and myself a little I went to Sequoia National Forest. It’s a really impressive and big forest, the trees are huge and massif! I’ve been standing under the biggest tree in the world for about half an hour until my beard was frozen of the icy cold. 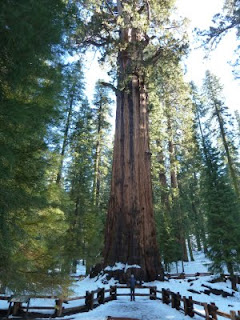 The next day I drove in to Yosemite National Park! Beautiful and so impressive. I’ve never thought it was possible to see so much climbable rock, so high in one eye view.
When I arrived at Camp 4 I was a little disappointed because of all the restrictions!
In the 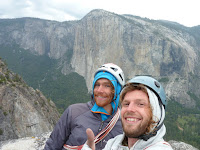 summer season you can only stay 7 days in the park and so only camp 7 days. On top of that there was no space available anymore at Camp 4 when I arrived. Free camping just in the woods is pretty hard sometimes with the rangers patrolling trough the forest, looking for dirt-bags like me. Stories are going around that when the rangers find you, they even kick your ass and give you a fine over 200 dollars! Shitheads!

So the day after I arrived I woke up at 6 am to go and wait in line to check in for a campsite. I was seventh in line and I could conquer a one! I also slept 2 nights at the search and rescue camp in Niels’s hut! Thanks for that boy!

In this first week here I climbed 6 days and did already a lot of classics!
– Hardd (2pitches)
– Outer Limits (1 pitch)
– Serenity Crack (3pitches)
– Sons of Yesterday (5 pitches)
– Central Pillar of Frenzy ( 5 pitches)
– Kor- Beck (only did the first 4 pitches because was the same day as Frenzy)
– South by Southwest ( 6 pitches)
– The Nose up to Dolt Tower (11 pitches)
Of this last one I lead all the pitches (almost free) and Kevin followed up with the ascender! This was a super line! I’m ready for the whole 32 pitches!
– Generator Crack (1 pitch) My first Offwidth I tried! I did it almost first go on top-rope! This is so hard! The most physical style in climbing. Bouldering is nothing compared to offwidth.

So after all this I found three guys to share the gas to go to San Francisco where I picked up Florian Castagne from the airport at Saturday evening! I had been looking forward to this moment and am so psyched to share the trad-climbing/ multi-pitch experiences with someone I know! 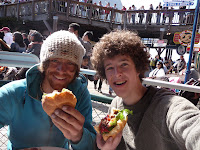 On Sunday we visited San Francisco in a nice and sunny day (rare for this city), we were lucky! We checked out the most touristic places like China Town, The Golden Gate Bridge, The Pyramid Center and The Fisherman’s Warf! All this was amazing, I really enjoyed this time and it felt good not to do all this alone but with some good company!

After a tiring day of being a real tourist we still didn’t have a fat-ass and did already one part of the drive to Yosemite. The next day we did big groceries before entering the park and I had to fix my left lower front light of the car. After that, Flow (like those silly Americans call him) and I continued our way to Yosemite. That same day I showed Flo around and we even climbed tree easy pitches! 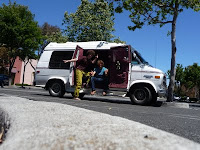 The next day we were really motivated to wake up at 5:45am to go and do East Buttress of Middle Cathedral. We woke up this early to be in front of the crowed, and yes, we were the first ones on the route with 3 parties behind us! It’s a nice and easy line of 11 pitches and good for Florian to start in Yosemite to get used to the style. 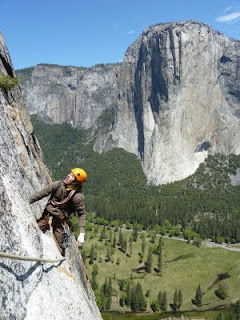 Today we tried to climb but the rain showed us the way to the launch in Curry village where tons of people are escaping from the rain. After I finished this blog post I’m going to wake up that Belgian who is having a jetlag in my Van for the moment! 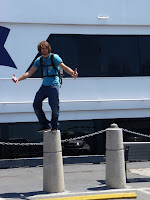 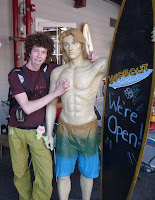 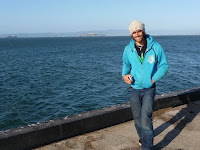 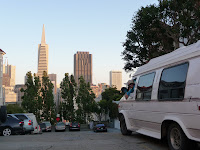 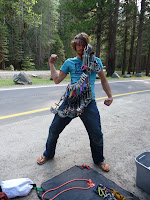